Once upon a time, a man named Jesus did a bunch of wholesome stuff. He never sinned, which is impressive considering he wasn’t allowed to eat pork because he was Jewish. He lived to be thirty-three years old and never ate bacon, not once, and imitation bacon bits hadn’t been invented yet. That’s called sacrifice, and you could learn something from Jesus. Bacon abstinence aside, Jesus was God, only in man form. People didn’t understand God the first few times, so He came down to Earth as a man to clarify His message through His Holy example. Henceforth, I stop capitalizing he and him because it’s obnoxious.

Jesus, that’s the man-God, made some amendments to the messages people had previously received, and he forgave people for their wrongdoings. He did this because everyone had become so goddamn judgmental, he could not take listening to us bicker for one more minute. Honestly, that was super chill of him, because when my kids are bickering in the car, I suggest we play a game to see who can go the longest without making any noise. Anyway, Jesus asked us to try out his new rules in return for his extreme sacrifice, and he asked us to really try this time, not just make up our own rules or focus on the rules other people are breaking (ahem, Pharisees). Just do your best, he asked. If it works, no one’s judging those who mess up. Do unto others as you would have them do unto you. Like, maybe pick up your dog’s droppings from the neighbor’s yard, but if you find the neighbor dog’s droppings in your yard, pick that up, too, and don’t get angry about it. Your neighbor might not know it’s there. It could have been a different dog. Maybe your neighbor was running late for work because her kid insisted on wearing flip flops in 20-degree weather, or she maybe had to rush to the hospital to see her mother.

To some, Jesus’ message seemed clear: Be nice. I mean it. Don’t make me come back here again. I’m going to check on you one more time, and if you’re still abusing each other, you’re in eternal time-out. If, by the time I get back, you’ve been kind and forgiving and you’ve followed my lead, we’re going to go rock-and-roll with the angels and throw back some shots but never have hangovers and eat lots of ice cream but never get fat, plus we’re going to sleep on fluffy white clouds. There will be peace.

After that, Jesus died, went to Hell, rose from the dead, and ascended into heaven. He left his friend Peter in charge of his message, and told him to pass it on. Peter was a fisherman and a loudmouth, the Catholic everyman. He was a rock, the first Pope, as we now call the supreme leader of the Roman Catholic Church. There have been many Popes since then, and reminiscent of the slumber party game Telephone, the Popes mixed up the message as they passed it from one to the next. Jesus’ “be nice” part got twisted and still hasn’t been fixed, but it seems many people of faith and no faith alike are trying to muddle through their lives, being kind and hoping for some compassion in return.

Over the millennia, while playing it a little fast and loose with Jesus’ message, the men in charge of the Roman Catholic Church came up with some other stuff. For example, they decided people shouldn’t eat meat on Fridays because every Friday, Catholics should remember how Christ died a gruesome, horrible death, nailed to a cross. Even though Jesus mentioned a few times that fasting had value, as far as we know, he never asked followers to honor his message of compassion by making meaningless sacrifices on the weekday he died. I’m guessing he would have preferred that we would give of ourselves and use the time to reflect on how we could make the world a kinder, love-filled place. But who am I? Not a Pope, that’s for sure. The official guardians of Christ’s message devised rules for honoring his sacrifice and declared it sinful to eat meat on Fridays, even though keeping Kosher, as Jesus would have done as a Jew, wasn’t really necessary anymore. Except for Fridays, followers of Christ could have pork. Bacon for everyone (who obey Pope’s rules)! But for a long time after that, people who accidentally ordered a club sandwich on a Friday at the MBNA New Associates Retreat went directly to Hell after death. A bit harsh.

Then, nearly 2,000 years after Jesus ascended into Heaven, the people in charge of the message made an announcement: Catholics may now eat meat on Fridays. Hooray, Jesus! Not during Lent, of course; abstinence from meat is still required on Fridays during Lent. Glaring at people with hamburgers is optional. 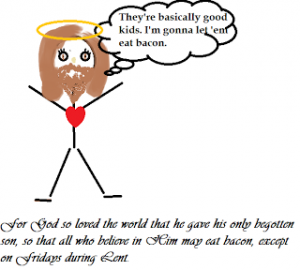 “We mean it,” the clergymen probably said and looked sternly over the top of their glasses at the people. And the people shuffled their feet and muttered, “So … no bacon on Lenten Fridays?” Members of the church hierarchy get pissy about questions—except for the Jesuits, who are, as far as I can tell, the only ones sanctioned to question any of the rules created A.D.

“No meat,” the men in charge repeated and clarified the rules: Catholics do not have to be vegetarians on Lenten Fridays. Fish is not meat, according to the Vatican. Also, broth is allowable because it’s boiled marrow, not meat. Bacon drippings are acceptable, but not bacon—even if you fry a little up just for the fat and it smells so delicious and salty and porky that you can’t resist one little nibble. If you eat just the corner that broke off in the drippings, the Pope will see you, and you will go to Hell. Snake meat is undefined, as far as I can tell. A water moccasin is a water animal that is not a fish, but I don’t think we’re allowed to eat dolphins either, no matter how delicious their large brains are. Not that I eat snakes or dolphins (except as an unfortunate byproduct of the canned tuna industry), but my policy is to eat what is served to be polite, and I’m not used to outside forces imposing food rules on me—especially when I’m just trying to be nice. I’d ask about the snake, in case it’s ever served to me on a Friday during Lent, but then I imagine the leader-men asking, “Is it really going to kill you to skip eating snake on Fridays during the most religious 40 days of the year?” The imagined guilt trip wears on my psyche before it even happens, so I just order a cheese pizza like every other Catholic on the planet, except when I forget that it’s Lent and Friday and accidentally order a cheeseburger.

It’s not the worst sacrifice. No one is forced to breakfast on scrambled eggs and grapefruit, so the Vatican’s rules are admittedly better than those of the Complete Scarsdale Medical Diet (hindsight: Herman Tarnower should have considered a bullet-proof Popemobile). Lacto-ovo vegetarians and pescatarians might find the rules rather accommodating, as eggs, dairy, and honey are allowed. People fourteen and older must abstain from eating meat on Fridays, period, except for the previously mentioned exemptions. Everyone must fast on Ash Wednesday and Good Friday, which are also days of abstinence. “Everyone” means anyone between the ages of fourteen and fifty-nine who are not pregnant and have no underlying health issues.

The Catholic Church spent a lot of time inventing and editing the food rules, but I submit some mistakes were made. The Church should let the people eat turkey on Fridays because turkeys are so stupid, they’re practically vegetables, but at press time, there’s no official dialog on this with the Pope, and maybe this is exactly the kind of idea that exemplifies why women aren’t allowed to make any rules.

I further submit that a a better plan would have been to prepare a few thousand open-face tuna melts, let the people feast, and watch how quickly those who feasted spread the word about God’s divinity. Tuna melts are God’s way of sharing manna. On Lenten Fridays—or any day—nothing is lovelier than warm tuna salad and a slice of tomato on a whole-wheat English muffin, covered in two slices of melted cheddar with a side of Utz potato chips and a pickle. If you truly want to know Jesus, add a slice of avocado under the cheese. The whole plate is heaven and might make a believer of you. Try though I do, I still find myself unsure. I firmly and wholeheartedly believe in tuna melts, compassion, and love. But God? Even as I’m grateful for the tuna melt on the plate before me, even as I make Lenten sacrifices and pray the Rosary, I wonder who is buried beneath a mudslide or who is making a pipe bomb in his basement and where is God.

(self-plagiarized and updated from a previous blog)